Three suspects were arrested after trying to sell a mother and baby pangolin on the black market in Western Zambia. According to News 24, the poaching of pangolins is a real concern considering that creature’s scales are extremely valuable in Asia for ‘traditional medicine.’

On June 12, Zambian authorities hunted down three smugglers who had the mother and baby pangolin contained in a wooden box. Zambia’s Department of National Parks and Wildlife took in the animals in an effort to breed them for better health.

Rescued near the Kafue National park, The GRI- Wildlife Crime Prevention project stated that the mother and baby pangolin are steadily ‘putting on weight.’ From the looks of their condition, Vicky Flynn of the David Shepherd Wildlife Foundation told The Dodo that the animals look like they were stuck in the wooden box for a lengthy two weeks.

After their necessary rehabilitation, the mother and baby pangolin will be released into the Kafue National Park where they’ll return to their natural habitats. ‘They seem to be eating,’ Annekim Geerdes of the GRI Wildlife Vet Program told The Dodo, ‘which is a great sign. They will be given a chance to rest and eat well again.’

According to Sarah V Schweig from The Dodo, ‘when night falls, Annekim takes the rescued, nocturnal pair out for a walk. Under the cover of darkness, the mother and baby are learning to feel safe again.’

Eating insects before bed, these creatures are one of the more fortunate creatures who escape the high number of animal trafficking. 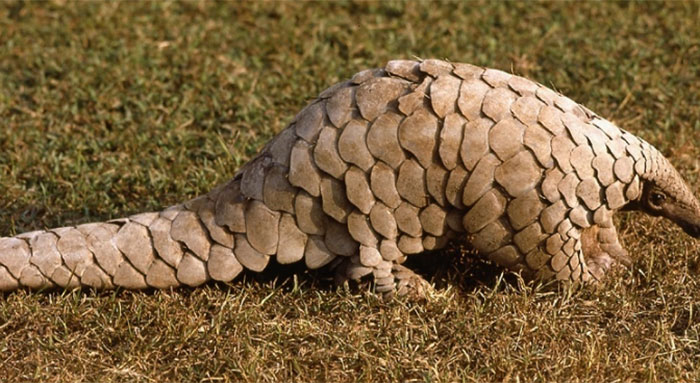 Found in regions throughout Africa and Asia, these hardened, overlapping scaled mammals are considered ‘to be the world’s most trafficked mammal,’ according to News 24.’ Thankfully, this mother and her baby were successfully rescued and set free.

Cat Brings Pink Flowers To Neighbors From Her Garden Everyday

Richard The Gorilla Can’t Get Enough Of The Camera